Early History of the Area

In 1738, the East Conococheague Congregation established the Presbyterian’s red meeting house at Moss Spring. The site was selected due to this water source. By 1741 Antrim Township was established, including all the land in the area.

The land at the center of the township would become Greencastle, at the intersection of the much traveled trails, Baltimore and Carlisle pikes. Here is where Allison’s Tavern hosted cattle and sheep herders and businessmen who would make their way south from Harrisburg and Carlisle to the Potomac to sell their wares or from Baltimore north to Pittsburgh bringing goods and then purchasing other items wanted or needed before the trip home.

William Allison, who operated the tavern, gave his son John 300 acres of land. With the help of school teacher James Crawford, the land was surveyed and developed into 246 building lots. The area began to grow once it was founded by John Allison in 1782. The name Greencastle was a reminder of the town in northern Ireland from where many of the new residents’ ancestors had emigrated.

The Scotch-Irish Presbyterians were followed by the Germans, Lutherans and Reformed. All the settlers and their families brought their unique customs and names with them, adding to the culture and eventually, the history of the region. By 1794 there were reportedly 60 houses in the village and George Washington passed through Greencastle in October of that year, stopping at McCullough’s Tavern on the southwest section of the Square.

By an act of the Pennsylvania Assembly, the Borough of Greencastle was incorporated March 25, 1805. Tickets had been sold years earlier, at about $8 each for a lottery to be held; the winner would receive one of the building lots. These lots were along main streets: Baltimore and Carlisle, the chief roadways, or along North (now Madison), West (Jefferson), South (Franklin) or East (Washington) streets. Lot 1 of the new borough would include a hotel, where Allison’s Tavern had stood, in the southwest section of Center Square; Lot 2, which continued south around the Square or “Diamond” as it was called, would become the first commercial building; and so on until homes and businesses stood surrounding the borough’s center and beyond.

Carl’s Drug Store began in Greencastle in 1825, opening a storefront on South Carlisle Street. The business is the longest, continuously operated drug store in the United States. The business would later move to three more locations, however, all its years of service were within the borough’s limits.

The railroad brought a different means of transport and receipt of goods for business and home. The Franklin Company built a rail line to connect Chambersburg and Hagerstown, Md. In 1840, the company laid the tracks and ties in the center of Carlisle Street bringing both cargo and passengers through the borough. In 1849 a printer with a Mormon group, who settled in the area because they thought they had found their “New Jerusalem,” began distribution of a weekly newspaper. The Conococheague Herald would later become the Echo Pilot Newspaper, still a part of the local business scene today. The religious group, however, had moved further west by the mid-1850s.

The people farmed the land. There were cabinetmakers, blacksmiths, printers, coopers, milliners, grocers and more as the area grew and prospered. Manufacturers came to the community, first employing men in a new work as farm implements were built and sold.

The area was touched by Civil War as Southern troops made their way along Carlisle Street headed for Gettysburg. Capt. Ulrich Dahlgren and his small group of men captured for the Union messages meant for Gen. Robert E. Lee, making a difference in the outcome of the famous battle. Union troops camped in the area and skirmishes were a part of the people’s lives. Corporal William H. Rihl of the First New York Lincoln Cavalry, was the first Union soldier killed on Union soil June 22, 1863, on farm land just northwest of the borough’s limits.

By 1869, the First National Bank of Greencastle (established in 1864) constructed their building on Center Square. The clock above the building, owned by the borough, was added in 1872, purchased through donations of the citizens. It would become a symbol of Greencastle. By 1901, the borough would boast a second bank as Citizens National (now Susquehanna) opened its doors to business.

Fire protection was formalized in the borough in 1896 when the Rescue Hose Company organized. Meeting in Council Hall (constructed in 1888), the company purchased and retains a 1741 hand pumper- brought out on special occasions for demonstrations. 1896 was special for other reasons: the first telephone was installed in Carl’s Drug Store and the Carl residence, and electric lights were made available to homeowners and businesses.

In 1902 many of Greencastle’s former residents would plan and gather for an Old Boys’ Reunion. It proved to be so successful that it was planned again in three years time and would include the women - the event has been held every three years since. The August celebration means cleaning and painting, keeping the borough a beautiful small town at its best, as visitors and former residents, are welcomed “home.” The entire program, from parade to fireworks to pageant, is offered free of charge - financed only through the sale of badges and donations.

In 1923 one of the “old boys” donated five acres of land to the people of the community in memory of his late brother Jerome. The David D. King donation became the Jerome R. King Playground, dedicated during Old Home Week of that year. The park includes a veteran’s memorial band shell, pavilions, tennis courts, baseball field, swings and slides, and it now covers 15 acres within the borough’s limits.

War would again touch the lives of the people as many of Greencastle’s young men and women would answer the call to serve. Frank L. Carbaugh, killed during World War I, would have his name live on as Frank L. Carbaugh: Post 373 The American Legion; Harry D. Zeigler would be honored through the name of the Veterans of Foreign Wars Post 6319 following World War II. Not long after the end of World War II they would leave their homes again during the Korean War. And later in the century young men and women would travel to a place called Viet Nam and other unfamiliar places.

In 1955 the bypass would become part of the landscape as Route 11 was moved from the main streets to a site further west and named Antrim Way. Along this road too, as well as the “downtown” area, business and jobs would be offered. In the 1960s, Interstate 81 would be completed and bring additional growth to the area as businesses and residences were added. Ease in travel to cities - 84 miles to Washington, 70 miles to Baltimore, D.C., 63 miles to Harrisburg, 158 miles to Pittsburgh and 152 miles to Philadelphia - would bring new travelers.

Greencastle is also home to: the Lilian S. Besore Memorial Library, open to the public; a school system that includes Tayamentasachta Environmental Center; the John L. Grove Medical Center; and much more. In 1994 Allison-Antrim Museum was formed for the preservation of local items of interest and for the promotion of the area’s history. The Rescue Hose Company building includes the HOCO Museum in its fire hall on South Washington Street. Both of these facilities are open to the public on various occasions - for additional and more in-depth study of the local area. 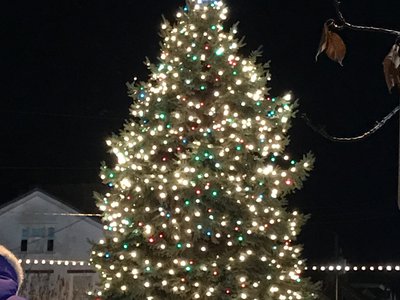